This is a continuation of How to land Android Dev job in 2019 part1. It works for people who have an app published on Google Play and want to land an Android dev job. Sending CVs randomly isn’t efficient. There are better ways.
Read those 5 tips to avoid wasting your time.

1. Size of a company

For fastest learning, look for smaller and medium-sized companies that already have Android developers with several years of experience.
I don’t mean startups. They are not the best idea for the first company unless your biggest interest is learning business instead of programming. You would end up doing too many things that are not best for learning programming. And there is no time for quality code.
By contrast, big corporations usually separate you from everything except a job you were hired for. For learning programming, it’s better than startups. They care about code quality and Code Reviews are guaranteed. But on the other hand, you won’t learn the whole process of developing software.
So how a medium-sized company looks like? It offers a nice balance between learning about software business and programming. Sometimes you have a lot of time for developing quality code, sometimes you have to ship features ASAP and pay down technical debt later.
I skipped the idea of solo freelancing because usually, it’s not the best idea You can learn by yourself but it’s much slower. And guess what. After a few years in a medium-sized company, you have an idea of both- how software business works and how to code Android apps properly. So you can specialize in any direction.

If you have your Android app published and well presented on Google Play, you are not a monkey. So don’t send your CV randomly, waiting for a response like a monkey. Make a list of nearby companies that you would like to work with (check out angel.co).

Find the names of their developers. Talk to them on social media but don’t spam everybody at once. You probably won’t be able to make an appointment with Jake Wharton or other busy guys but regular devs will find some time for you.

If nobody wants to meet you, go to the gym. The gym has a moment in fashion for developers and they talk about code reviews between sets.

Don’t take it too literally. It means that you should try everything. Find them wherever they are.

But before considering the gym…

Meetups are ultra-efficient. Find software development meetups nearby. Arrive 15-30minutes before the start and introduce yourself to guys sitting next to you. Ask them where they work. Tell them that you are looking for a job and ask them for a 3-min code review of your app repository. You are not there to listen to speakers. Chat with devs. Share your contact information and spend some time with them after the meetup. Then follow up on social media for some programming tips.

Ignore ‘open positions’. Some companies keep them only for better SEO. It’s nice if a company really needs an Android dev but great companies always hire great people. Don’t ignore companies that don’t have open positions on the Internet. They will consider hiring anyway if somebody recommends you to a manager or company owner.

It doesn’t necessarily mean adding more features. Add a better description, photos, fix critical bugs. Often people don’t have time to review your code but can check out the visual presentation of your app.  Continuously improve the codebase and presentation while actively looking for a job. At this point, you get some tips from developers. Listen to them and make changes.

If you attend meetups, talk to devs and continuously improve your app you will land a nice job soon. So don’t waste time doubting your process. Make adjustments and “Praise the Lord and Pass the Ammunition”.

Subscribe to my newsletter below to get information about my weekly Android dev posts.

I’m Jakub Chmiel. In the Android world, I’m in the process of developing 2 project management mobile applications for construction teams. In these projects, I add business value fast trying to minimize technical debt. 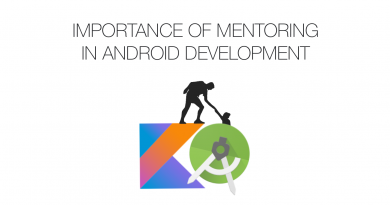 Importance of mentoring in Android development

Quick summary of recent libraries to put hands on